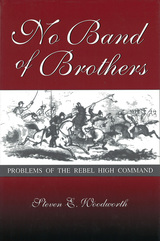 The Civil War was barely over before Southerners and other students of the war began to examine the Confederate high command in search of an explanation for the South's failure. Although years of research failed to show that the South's defeat was due to a single, overriding cause, the actions of the Southern leaders during the war were certainly among the reasons the South lost the war.

In No Band of Brothers, Steven Woodworth explores, through a series of essays, various facets of the way the Confederacy waged its unsuccessful war for secession. He examines Jefferson Davis and some of his more important generals, including Pierre G. T. Beauregard, Leonidas Polk, Joseph E. Johnston, Robert E. Lee, James Longstreet, and Thomas J. "Stonewall" Jackson; the Confederacy's strategic plans; and the South's success in making competent officers out of men with very little military preparation.

Woodworth particularly looks at the personalities and personal relationships that affected the course and outcome of the war. What made a good general? What could make an otherwise able man a failure as a general? What role did personal friendships or animosities play in the Confederacy's top command assignments and decisions? How successful was the Confederacy in making competent generals out of its civilian leaders? In what ways did Jefferson Davis succeed or fail in maximizing the chances for the success of his cause?

In analyzing the Confederate leadership, Woodworth reveals some weaknesses, many strengths, and much new information. No Band of Brothers will be an important addition to Civil War scholarship and will be welcomed by professional historians, amateur historians, students, and the general reader alike.

Steven E. Woodworth is Assistant Professor of History at Texas Christian University in Fort Worth. He is the author or editor of several books, including Davis and Lee at War and Jefferson Davis and His Generals: The Failure of Confederate Command in the West.