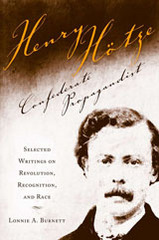 The life of Henry Hotze encompasses the history of antebellum Mobile, Confederate military recruitment, Civil War diplomacy and international intrigue, and the development of a Darwinian-based effort to find scientific evidence for differences among human “races.” When civil war broke out in his adopted country, Hotze enthusiastically assumed the mindset of the young Southern secessionist, serving first as newspaper correspondent and Confederate soldier until the Confederate government selected him as an agent, with instructions to promote the Southern cause in London. There he founded, edited, and wrote most of the content for The Index, a pro-Southern paper, as a part of the effort to convince the British Government to extend recognition to the Confederacy.
Among the arguments Hotze employed were adaptations of the scientific racism of the period, which attempted to establish a rational basis for assumptions of racial difference. After the collapse of the Confederacy in 1865, Hötze remained in Europe, where he became an active partisan and promoter of the ideas of Arthur de Gobineau (1816–1882) whose work Essai sur L’inégalité des Races Humaines was a founding document in racism’s struggle for intellectual respectability.
This work consists of a biographical essay on Hotze; his contributions to Mobile newspapers during his military service in 1861; his correspondence with Confederate officials during his service in London; articles he published in London to influence British and European opinion; and his correspondence with, and published work in support of, Gobineau.
AUTHOR BIOGRAPHY
Lonnie A. Burnett is Associate Professor of History at the University of Mobile and author of The Pen Makes a Good Sword: John Forsyth of theMobile Register.
TABLE OF CONTENTS