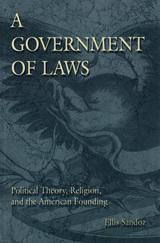 In A Government of Laws, which includes a new preface, Ellis Sandoz re-evaluates the traditional understanding of the philosophic and intellectual background of the American founding.  Through an exhaustive assessment of Renaissance, medieval, and ancient political philosophy, he shows that the founding fathers were consciously and explicitly seeking to create a political order that would meet the demands of human nature and society.  This rigorous and searching analysis of the sources of political and constitutional theory generates an original and provocative approach to American thought and experience.

Ellis Sandoz, Hermann Moyse Jr. Distinguished Professor of Political Science, is Director of the Eric Voegelin Institute for American Renaissance Studies at Louisiana State University. He is the general editor of Voegelin's History of Political Ideas and author or editor of numerous books, including The Politics of Truth and Other Untimely Essays: The Crisis of Civic Consciousness and most recently The Voegelinian Revolution: A Biographical Introduction.