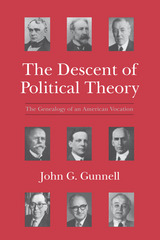 This provocative work reveals the origins and development of political theory as it is presently understood—and misunderstood. Tracing the evolution of the field from the nineteenth century to the present, John G. Gunnell shows how current controversies, like those over liberalism or the relationship of theory to practice, are actually the unresolved legacy of a forgotten past. By uncovering this past, Gunnell exposes the forces that animate and structure political theory today.

As critical as it is revelatory, this thoughtful book should be read by any one interested in the history of political theory or science—or in the relationship of social science to political practice in the United States.
AUTHOR BIOGRAPHY
John G. Gunnell is professor of political science at the State University of New York, Albany. He is the author of four books, the most recent Between Philosophy and Politics: The Alienation of Political Theory.
TABLE OF CONTENTS


Preface
Introduction
1. The Practice of Theory: End and Beginning
2. State and University
3. The Institutionalization of Theory
4. Politics and Political Theory
5. In Search of Identity
6. The Crisis of Liberalism
7. The Idea of Theoretical Intervention: The Weimar Conversation
8. Coming to America
9. Political Science and Political Theory
10. The Behavioral Reformation
11. Exodus
Notes
Index