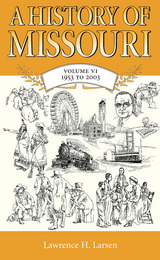 A History of Missouri: Volume VI is the final volume of A History of Missouri. Beginning at the close of the Truman presidency and ending in 2003, the two hundredth anniversary of the Louisiana Purchase agreement and of the organization of the Lewis and Clark expedition, Volume VI explains how modern Missouri bridged the years between the mid-twentieth century and the new millennium.
Central to the period was the end of segregation, the demise of bossism in Kansas City and St. Louis, changes in the economy, and the impact of cross-state urbanization. Among other developments were the building of the interstate highways and the marked expansion of higher education. Larsen’s overall thesis is that during these years Missouri continued to advance in a restrained manner and at a moderate pace. The Republican party revived, suburbs mushroomed around the central cities, the state government grew and expanded its functions, the population became more diversified, concerns increased for the natural and built environments, higher education was transformed, small towns held their own, and the state declined as a force in national politics.
A History of Missouri: Volume VI, 1953 to 2003 is very much a pioneering effort and one that should be welcomed by anyone interested in the history of Missouri, from casual observers to policymakers.
AUTHOR BIOGRAPHY
Lawrence H. Larsen is Professor Emeritus of History at the University of Missouri–Kansas City. He is the author or coauthor of more than a dozen books, including Pendergast! (University of Missouri Press).
TABLE OF CONTENTS