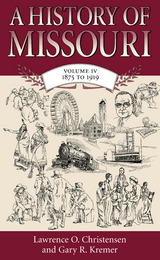 Drawing on original research in primary sources, this comprehensive study covers such topics as the Constitution of 1875, the impact of railroad expansion, the 1904 World's Fair, the Populist and Progressive movements, and World War I. It also deals with less familiar topics, such as the state's use of convict labor to save taxpayers money, the emergence of women's clubs, the arrival of moving pictures, and the terrible conditions under which coal miners worked and lived.

Research on the weekly newspapers of such towns as Edina, Bethany, Boonville, Mount Vernon, and Kennett provides a comparative regional and rural perspective on events that took place around the turn of the century, giving the reader a unique glimpse of what small-town life was like. The rapid growth of Missouri's cities is also discussed in detail. St. Louis's development as one of the nation's leading cities is fully recorded, as is the rise of smaller towns such as St. Joseph, Joplin, Springfield, and Sedalia. Kansas City's City Beautiful Movement and the rise of the Pendergast Machine are also treated.

Significant attention is given to World War I. The authors document Missourians' reliance on voluntarism to support the war effort, and they also explain how government officials mobilized the citizens of the state to support the war, especially Missourians of German ancestry. The book fully details the experiences of African Americans and women who lived in Missouri during the period.

This extensive and balanced coverage of Missouri as it moved into the twentieth century will be the authoritative volume on the subject for decades to come. Anyone with an interest in Missouri history will treasure this informative new resource.

Gary R. Kremer is Professor of History at William Woods University in Fulton, Missouri. He is the author or editor of numerous works, including Missouri’s Black Heritage, Revised Edition and Dictionary of Missouri Biography, both available from the University of Missouri Press.