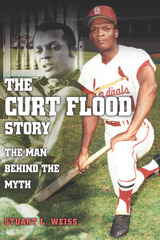 Curt Flood, former star center fielder for the St. Louis Cardinals, is a hero to many for selflessly sacrificing his career to challenge the legality of baseball’s reserve system. Although he lost his case before the Supreme Court, he has become for many a martyr in the eventually successful battle for free agency. Sportswriters and fans alike have helped to paint a picture of Flood as a larger-than-life figure, a portrait that, unhappily, cannot stand closer inspection. This book reveals the real Curt Flood—more man than myth.

Flood stirred up a hornet’s nest by refusing to be traded from the Cardinals to the Philadelphia Phillies after the 1969 season, arguing that Major League Baseball’s reserve system reduced him to the status of bondage. Flood decided to resist a system in which his contract could be traded without his consent and in which he was not at liberty to negotiate his services in an open market. Stuart Weiss examines the man behind the decision, exploring the span of Flood’s life and shedding light on his relationships with those who helped shape his determination to sue baseball and providing a new perspective on the lawsuit that found its way to the U.S. Supreme Court.

Although a superb player, Flood was known to be temperamental and sensitive; in suing Major League Baseball he transformed his grievances against the Cardinals front office into an attack on how the business of big-league ball was conducted. Weiss shows that Flood was far from the stereotypical “dumb jock” but was rather a proud, multifaceted black man in a business run by white moguls. By illuminating Flood’s private side, rarely seen by the public, he reveals how Flood misled a gullible press on a regular basis and how his 1971 memoir, The Way It Is, didn’t tell it the way it really was.

Drawing on previously untapped sources, Weiss examines more fully and deeply than other writers the complexities of Flood’s decision to pursue his lawsuit—and demonstrates that the picture of Flood as a martyr for free agency is a myth. He suggests why, of all the players traded or sold through the years, it was Flood who brought this challenge. Weiss also explains how Flood’s battle against the reserve system cannot be understood in isolation from the personal experiences that precipitated it, such as his youth in a dysfunctional home, his troubled first marriage, his financial problems, and his unwavering commitment to the Cardinals.

The Curt Flood Story is a realistic account of an eloquent man who presented a warm, even vulnerable, face to the public as well as to friends, while hiding his inner furies. It shows that Flood was neither a hero nor a martyr but a victim of unique circumstances and his own life.