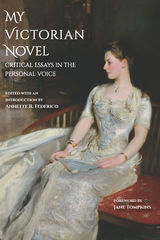 The previously unpublished essays collected here are by literary scholars who have dedicated their lives to reading and studying nineteenth-century British fiction and the Victorian world. Each writes about a novel that has acquired personal relevance to them––a work that has become entwined with their own story, or that remains elusive or compelling for reasons hard to explain.

These are essays in the original sense of the word, attempts: individual and experiential approaches to literary works that have subjective meanings beyond social facts. By reflecting on their own histories with novels taught, studied, researched, and re-experienced in different contexts over many years, the contributors reveal how an aesthetic object comes to inhabit our critical, pedagogical, and personal lives.

By inviting scholars to share their experiences with a favorite novel without the pressure of an analytical agenda, the sociable essays in My Victorian Novel seek to restore some vitality to the act of literary criticism, and encourage other scholars to talk about the importance of reading in their lives and the stories that have enchanted and transformed them.

The novels in this collection include:
Jane Eyre by Charlotte Brontë
The Duke’s Children  by Anthony Trollope
The Adventures of Sherlock Holmes by Arthur Conan Doyle
The Newcomes by William Makepeace Thackeray
Middlemarch  by George Eliot
Daniel Deronda by George Eliot
The Return of the Native by Thomas Hardy
Vanity Fair by William Makepeace Thackeray
North and South by Elizabeth Gaskell
Bleak House by Charles Dickens
David Copperfield by Charles Dickens
New Grub Street by George Gissing
The Pickwick Papers by Charles Dickens
Dracula by Bram Stoker
Wuthering Heights by Emily Brontë
AUTHOR BIOGRAPHY
Annette R. Federico is a professor of English at James Madison University. She is the author of four books, most recently Thus I Lived with Words: Robert Louis Stevenson and the Writer’s Craft, and editor of Gilbert and Gubar’s “The Madwoman in the Attic” after Thirty Years (University of Missouri Press). She lives in Harrisonburg, Virginia.

REVIEWS
“Annette Federico's My Victorian Novel is an exhilarating anthology. The essays she assembles here—and they are personal essays, not professional ‘articles’—are riveting narratives even while they are also astute literary analyses. At a moment when the humanities are in the doldrums and theory seems to have withered on the vine, these lively memoirs of richly receptive readings point to a new way forward, an almost Arnoldian compromise between sophisticated thinking and self-aware feeling.”—Sandra M. Gilbert, University of California, Davis, author of Rereading Women: Thirty Years of Exploring Our Literary Traditions


“'Professionalism' is a means not an end. Less is more. Professors are better off when they professionalize less and risk extinction when professionalization is primary.’ This is the first of the ‘95 Theses’ the poet-academic Charles Bernstein published in the MLA’s journal Profession in 2016. My Victorian Novel rises engagingly and entertainingly to Bernstein’s challenge. Threading together 15 mainly North American lives from our contemporary moment and 15 mainly English novels of the nineteenth century, it does more for literature by doing less for its professors. Mixing up the sexual and the scholarly, the affective and the intellectual, the personal and the political, it celebrates novel reading in fifteen ways, showing how it mattered in the past and why it matters differently now. An essential book for the amateur who lives on in every professional and for so-called ‘ordinary’ readers too.”—Peter D. McDonald, University of Oxford, author of Artefacts of Writing: Ideas of the State and Communities of Letters from Matthew Arnold to Xu Bing


“Personal, erudite, and provocative, My Victorian Novel is an engaging collection of essays, which speaks to the intimate nature of our relationship with books. Each essay functions as a miniature memoir and paean to the enduring power and pleasures of the Victorian novel. As contributors reflect on their evolving emotional attachments and critical experiences with novels ranging from The Pickwick Papers to Dracula, what emerges throughout the collection is each work’s enduring and unique capacity to instruct, delight, and surprise. It is impossible to read any of the essays by this distinguished group of scholars without similarly reflecting on that one remarkable book—the steadfast literary companion of our own lives—that has indelibly shaped our personal and professional histories. My Victorian Novel is not just the book that Victorianists have secretly been longing for, it is the book that literary studies has been waiting for.”—Maria K. Bachman, Middle Tennessee State University, coeditor of The Socio-Literary Imaginary in 19th and 20th Century Britain: Victorian and Edwardian Inflections