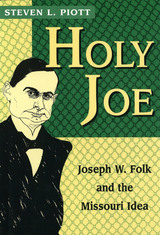 One of Missouri's best-known leaders of the Progressive Era, Joseph W. Folk epitomized the moral reformer in politics. As a crusading district attorney in St. Louis, Folk won national acclaim for his investigations of wrongdoing in municipal government. With the help of muckraking journalist Lincoln Steffens, Folk revealed for the first time the extent of political corruption then plaguing America's cities and helped bring about a popular demand for the regeneration of municipal government nationwide.

A firm believer that the law was a weapon with which to check political corruption and restrain powerful special interests, Folk popularized the "Missouri Idea," the doctrine that public office is a public trust, not merely an opportunity for private gain. Elected as governor of Missouri in 1904, Folk orchestrated a remarkable record of legislative accomplishment. He established himself as one of Missouri's outstanding governors and one of the nation's leading progressive reformers.

In asserting that traditional moral values could be applied to politics, Folk became known among friends and enemies as Holy Joe. His refusal to make any distinction between public and private morality, however, alienated some Missourians, while his disregard for party organization angered politicians. His idealism cost him political advancement and ultimately a place in national politics.

Whereas some studies of the Progressive Era have minimized the moral dimension of Progressivism and downplayed the importance of reformers like Joseph W. Folk, Holy Joe establishes him as a major leader of the Progressive movement. This biography will be a welcome addition to the literature on the subject.

Steven L. Piott is Professor of History at Clarion University in Pennsylvania. He is the author of The Anti-Monopoly Persuasion: Popular Resistance to the Rise of Big Business in the Midwest.