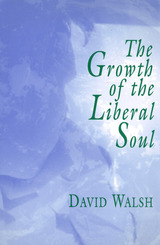 In The Growth of the Liberal Soul, David Walsh confronts a core difficulty of the liberal democratic tradition in explaining and justifying itself. Acknowledging the incompleteness of liberal order as a theoretical explication of its underlying beliefs, Walsh analyzes contemporary debates about the foundations of liberal democratic politics. The widespread abandonment of the search for foundations by John Rawls, Richard Rorty, Michael Oakeshott, and the deconstructionists has been interpreted as signifying the absence of any sustaining inner resources. The result has been the confusion of contemporary liberal democratic self-understanding, which cannot make sense of its own extraordinary historical success nor apparently prevent the evident unraveling of its own moral code. It is this state of crisis from which Walsh's study takes its point of departure.

Unique in combining contemporary political relevance with historical depth, The Growth of the Liberal Soul brings together two approaches that are often treated separately. Walsh elaborates on the existential core of the liberal political tradition by way of an investigation of the historical sources and the raging contemporary debates.

While many scholars have been content to call attention to the dependence of liberal politics on transcendent faith, Walsh studies the progress of experiential reality by which that connection is concretely effected in life. The Growth of the Liberal Soul will be of interest to all readers, especially those interested in the relationship between religion and politics.

David Walsh is Professor of Politics at the Catholic University of Maerica in Washington, D.C.  He is also the author of After Ideology: Recovering the Spiritual Foundations of Freedom.