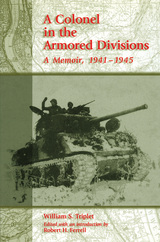 In this fascinating memoir William S. Triplet continues the saga begun in his earlier book, A Youth in the Meuse-Argonne: A Memoir, 1917-1918. After serving in World War I, Triplet chose to become a career military man and entered West Point. Upon graduation in 1924, his assignments were routine—to regiments in the Southwest and in Panama or as an officer in charge of Reserve Officers' Training Corps units or of men sent to a tank school. All this changed, however, when a new war opened in Europe.

From 1940 to1942, Triplet was assigned to the Infantry Board at Fort Benning, Georgia, where he engaged in testing new weapons and machines for the expanding army. He became a full colonel in December 1942. After leaving Benning he received posts with four armored forces: the Thirteenth Armored Division forming in the United States, an amphibious tank and troop carrier group training at Fort Ord, California, and the Second and Seventh Armored Divisions in Europe. His extraordinary abilities as a tank commander became evident in the Seventh Armored, where he took over a four-thousand-man unit known as Combat Command A. He was soon moving from triumph to triumph as he led his unit into Germany. Here was much room for professional judgment and decision, and the colonel was in his element. In the war's last days Triplet and his men fought their way to the Baltic, preventing many German troops from joining in the defense of Berlin against the advancing Soviet army.

Although Triplet was recommended for brigadier general, Dwight D. Eisenhower believed the U.S. Army had enough generals to finish the war; thus, the indomitable Triplet served out the few remaining years of his career as a colonel. After retiring in 1954, Triplet moved to Leesburg, Virginia, where he soon began to mull over his military experiences. Fascinated by the history he had witnessed, engaged by the attraction of writing about it, he recorded his memories with a combination of verve, thoughtfulness, and harsh judgments concerning ranking officers he considered incompetent— generals not excluded.

Through his annotations, Robert H. Ferrell provides the historical context for Triplet's experiences. Well written and completely absorbing, A Colonel in the Armored Divisions provides readers the rare opportunity to see firsthand what a real professional in the U.S. Army thought about America's preparation for and participation in the war against Germany and Japan.