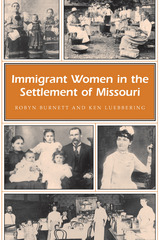 Robyn Burnett and Ken Luebbering first looked at how immigration has affected Missouri’s cultural landscape in their popular book German Settlement in Missouri: New Land, Old Ways. Now they tell the stories of women from all across Europe who left the Old World for Missouri. Drawing heavily on the women’s own stories, Immigrant Women in the Settlement of Missouri illustrates common elements of their lives without minimizing the diversity and complexity of each individual’s experience.
The book begins with descriptions culled from diaries, letters, and memoirs documenting preparations for the journey, the perilous Atlantic crossing, and the sometimes equally long and arduous trip from the port of entry to Missouri. Burnett and Luebbering go on to examine how women, once in Missouri, coped with the problems of daily life in an unfamiliar and occasionally hostile environment. Whether it was the hardships of the frontier, the harsh realities of urban life, childbirth, the deaths of family members, isolation, or prejudice, their new lives brought numerous challenges. Many found success and contentment, as well, and the book also documents their joys and triumphs: physical survival, economic prosperity, thriving families, friendships, and community celebrations.
Because it examines the lives of women from many social classes and ethnic backgrounds, Immigrant Women in the Settlement of Missouri does much to explain the rich cultural diversity Missouri enjoys today. The photographs and narratives relating to Czech, French, German, Hungarian, Irish, Italian, and Polish life will remind descendants of immigrants that many customs and traditions they grew up practicing have roots in their home countries and will also promote understanding of the customs of other cultures. In addition to the ethnic and class differences that affected these women’s lives, the book also notes the impact of the various eras in which they lived, their education, the circumstances of their migrations, and their destinations across Missouri.
With their engaging and straightforward narrative, Burnett and Luebbering take the reader chronologically through the history of the state from the colonial period to the Civil War and industrialization. Like all Missouri Heritage Readers, this one is presented in an accessible format with abundant illustrations, and it is sure to please both general readers and those engaged in immigrant and women’s studies.
AUTHOR BIOGRAPHY
Robyn Burnett and Ken Luebbering are native Missourians and the coauthors of German Settlement in Missouri: New Land, Old Ways (University of Missouri Press).
TABLE OF CONTENTS