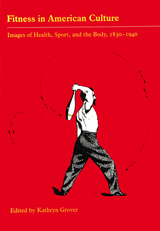 Fitness in American Culture: Images of Health, Sport, and the Body, 1830-1940
edited by Kathryn Grover
University of Massachusetts Press, 1989
Paper: 978-0-87023-682-2
The quest for physical health and fitness has a long history in the United States. From spinach to shredded wheat to patent medicines, from calisthenics to bicycling to organized sports, Americans have searched vigorously and with great imagination for health, vitality, and physical perfection. Focusing on the period from 1830 to 1940, this collection of essays by six distinguished historians explores Americans' fascination with health and sport, a preoccupation that continues even today in the current diet and fitness craze. In his introduction, Harvey Green discusses one of the major ironies of this period: that the "progress" and achievements Americans sought in the economic and technological spheres were in fact endangering their health and weakening the entire body politic. The rapid technological changes taking place in the world forced many people to alter fundamentally their thinking about the importance of health and physical fitness not just for themselves as individuals but also for the good of society. Other topics explored include changing attitudes toward fitness and wellness, how advertising reflected health concerns, iron as a symbol of vitality and strength, the increasing specialization of foods, and the advent of organized and competitive sports.
AUTHOR BIOGRAPHY
Kathryn Grover is director of publications at the Margaret Woodbury Strong Museum.