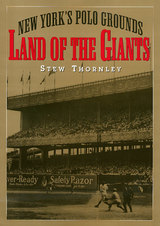 Land of the Giants: New York's Polo Grounds
by Stewart Thornley
Temple University Press, 2000
Cloth: 978-1-56639-796-4
More than thirty years after its demolition, the Polo Grounds -- like some other urban neighborhood parks such as Ebbets Field, Yankee Stadium, Fenway Park, and Wrigley Field -- still holds a place in the hearts of baseball fans.

The Polo Grounds was the home of the New York Giants from John McGraw and Christy Mathewson to Carl Hubbell and Mel Ott  to Willie Mays and Leo Durocher. It was also home to the Yankees when Babe Ruth's home run production was soaring (which led to "the House that Ruth built") and home to the Mets in their painful early years.

From "Merkle's Boner," which cost the New York Giants a pennant, to Bobby Thomson's homer, which won them one, Stew Thornley retells the legendary events of the park and its legendary personalities. He reveals little-known facts too:

When the championship Giants and Yankees played in the 1921 and 1922 World Series, it
wasn't a "subway series," because the two teams shared the same ballpark.

The team Bays was playing for when he hit his firstd home run in the Polo Grounds was
not the Giants, but the Birmingham Black Barons. The Polo Grounds was also the site for
the Negro World Series games in 1946 and 1947.

Fans cherish not only the historic moments and team traditions of these stadiums, but treasure their physical peculiarities. Like the "Green Monster" at Fenway Park, the unusual horseshoe shape of the Polo Grounds made the park a special place to play. Stew Thornley analyzes the effect of the very short porches along the foul lines and of a cavernous center field on home run production and hitting in general.

Baseball wasn't the only sport played in the Polo Grounds. The footbal Giants played here from 1925 to 1955, but the stadium was better known for some of the great college games, including the 1924 Army-Notre Dame game in which the "Four Horsemen" of Notre Dame were christened. Numerous boxing title bouts were held at the Polo Grounds, and it also hosted tennis, rodeo, midget auto racing, outdoor opera, ice skating, and religious rallies.
AUTHOR BIOGRAPHY
Stew Thornley is a health educator with the Minnesota Department of Health. A freelance writer and former radio sportscaster, he has published a variety of books on baseball and other sports.
TABLE OF CONTENTS

Chapter 1   Oddest of the Odd