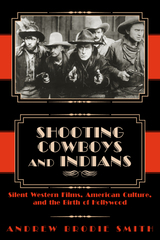 Shooting Cowboys and Indians: Silent Western Films, American Culture, and the Birth of Hollywood
by Andrew Brodie Smith
University Press of Colorado, 2003
Cloth: 978-0-87081-746-5
Academics have generally dismissed Hollywood's cowboy and Indian movies - one of its defining successful genres - as specious, one-dimensional, and crassly commercial. In Shooting Cowboys and Indians, Andrew Brodie Smith challenges this simplistic characterization of the genre, illustrating the complex and sometimes contentious process by which business interests commercialized images of the West.

Tracing the western from its hazy silent-picture origins in the 1890s to the advent of talking pictures in the 1920s, Smith examines the ways in which silent westerns contributed to the overall development of the film industry.

Focusing on such early important production companies as Selig Polyscope, New York Motion Picture, and Essanay, Smith revises current thinking about the birth of Hollywood and the establishment of Los Angeles as the nexus of filmmaking in the United States. Smith also reveals the role silent westerns played in the creation of the white male screen hero that dominated American popular culture in the twentieth century.

Illustrated with dozens of historic photos and movie stills, this engaging and substantive story will appeal to scholars interested in Western history, film history, and film studies as well as general readers hoping to learn more about this little-known chapter in popular filmmaking.

AUTHOR BIOGRAPHY
Andrew Brodie Smith received his Ph.D. in history from the University of California, Los Angeles. He lives in Washington, D. C., and works as a writer, book dealer, and consultant for nonprofit organizations.
TABLE OF CONTENTS