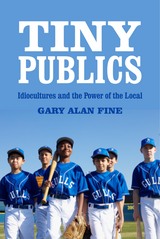 If all politics is local, then so is almost everything else, argues sociologist Gary Alan Fine. We organize our lives by relying on those closest to us—family members, friends, work colleagues, team mates, and other intimates—to create meaning and order. In this thoughtful and wide-ranging book, Fine argues that the basic building blocks of society itself are forged within the boundaries of such small groups, the "tiny publics" necessary for a robust, functioning social order at all levels. Action, meaning, authority, inequality, organization, and institutions all have their roots in small groups. Yet for the past twenty-five years social scientists have tended to ignore the power of groups in favor of an emphasis on organizations, societies, or individuals. Based on over thirty-five years of Fine's own ethnographic research across an array of small groups, Tiny Publics presents a compelling new theory of the pivotal role of small groups in organizing social life. No social system can thrive without flourishing small groups. They provide havens in an impersonal world, where faceless organizations become humanized. Taking examples from such diverse worlds as Little League baseball teams, restaurant workers, high school debate teams, weather forecasters, and political volunteers, Fine demonstrates how each group has its own unique culture, or idioculture—the system of knowledge, beliefs, behavior, and customs that define and hold a group together. With their dense network of relationships, groups serve as important sources of social and cultural capital for their members. The apparently innocuous jokes, rituals, and nicknames prevalent within Little League baseball teams help establish how teams function internally and how they compete with other teams. Small groups also provide a platform for their members to engage in broader social discourse and a supportive environment to begin effecting change in larger institutions. In his studies of mushroom collectors and high school debate teams, Fine demonstrates the importance of stories that group members tell each other about their successes and frustrations in fostering a strong sense of social cohesion. And Fine shows how the personal commitment political volunteers bring to their efforts is reinforced by the close-knit nature of their work, which in turn has the power to change larger groups and institutions. In this way, the actions and debates begun in small groups can eventually radiate outward to affect every level of society. Fine convincingly demonstrates how small groups provide fertile ground for the seeds of civic engagement. Outcomes often attributed to large-scale social forces originate within such small-scale domains. Employing rich insights from both sociology and social psychology, as well as vivid examples from a revealing array of real-work groups, Tiny Publics provides a compelling examination of the importance of small groups and of the rich vitality they bring to social life. A Volume in the Russell Sage Foundation Series on Trust
AUTHOR BIOGRAPHY
GARY ALAN FINE is professor of sociology at Northwestern University.
TABLE OF CONTENTS
Title Page
Copyright
About the Series
Other Works in the Series
Dedication
Contents
About the Author
Introduction: Tiny Publics as Social Order
1. The Power of Groups
2. The Dynamics of Idioculture
3. The Power of Constraints and Exteriority
4. Norms and Action
5. The Performance of Ideology
6. Wispy Communities
7. Tiny Publics in Civil Society
8. The Extension of the Local
9. Action and Its Publics
Notes
References
Index