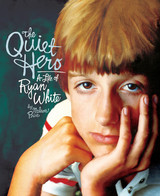 In 1985 the eyes of the world turned to the Hoosier State and the attempt by a thirteen-year-old Kokomo, Indiana, teenager to do what seemed to be a simple task—join his fellow classmates at Western Middle School in Russiaville, the school to which his Kokomo neighborhood was assigned. The teenager, Ryan White, however, had been diagnosed with Acquired Immune Deficiency Syndrome from contaminated blood-based products used to treat his hemophilia. “It was my decision,” White said, “to live a normal life, go to school, be with friends, and enjoying day to day activities. It was not going to be easy.”
White's words were an understatement, to say the least. His wish to return to school was met with panic by parents and some school officials. The controversy about White and the quiet courage he and his mother, Jeanne, displayed in their battle to have him join his classmates is explored in the eleventh volume in the Indiana Historical Society Press’s Youth Biography Series. The Quiet Hero is written by Nelson Price, who wrote about White’s odyssey during his days as a reporter and columnist for the Indianapolis News. Price goes behind the scenes and brings to light stories and individuals who might have been lost in the media spotlight.
After a nine-month court battle, White won the right to return to school, but with concessions. These were not enough for parents of twenty children, who responded by starting their own school. At school, White became the target of slurs and lies, and his locker was vandalized. Although the White family received support from citizens and celebrities around the world, particularly rock singer Elton John, the situation grew so controversial in Kokomo that they moved to Cicero, Indiana—a community that greeted them much differently.
In Price’s book, White, who succumbed to his disease in 1990, comes across as a normal teenager who met an impossible situation with uncommon grace, courage, and wisdom. “It was difficult at times, to handle; but I tried to ignore the injustice, because I knew the people were wrong,” White said. “My family and I held no hatred for those people because we realized they were victims of their own ignorance.”
AUTHOR BIOGRAPHY
Nelson Price is the author of several books, including Indiana Legends: Famous Hoosiers from Johnny Appleseed to David Letterman, Legendary Hoosiers, and Indianapolis Then and Now. A former reporter, feature writer, and columnist for the Indianapolis News and Indianapolis Star, Price is the host of the weekly Hoosier History Live! On WICR 88.7-FM. A fifth-generation Hoosier, Price grew up in Indianapolis and is a Phi Beta Kappa graduate of Indiana University, Bloomington. He has taught journalism at IU, Indianapolis, and serves on the boards of a number of civic, history, and journalism-related organizations.
TABLE OF CONTENTS
Contents
Preface
Chapter 1
Chapter 2
Chapter 3
Chapter 4
Chapter 5
Chapter 6
Chapter 7
Chapter 8
Epilogue
Learn More about Ryan White
Index