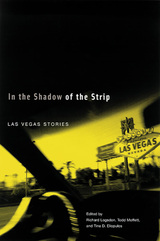 In The Shadow Of The Strip: Las Vegas Stories
by Richard Logsdon, Todd Moffett and Tina D. Eliopulos
University of Nevada Press, 2003
Paper: 978-0-87417-549-3
Las Vegas holds a unique place in the popular imagination and in the work of any number of contemporary writers of fiction. The fourteen stories in this anthology explore the multifarious personalities of America’s “Sin City” through the experiences of the dreamers and gamblers, the losers and the lost, who inhabit Las Vegas and confront its myriad attractions and disappointments.
AUTHOR BIOGRAPHY
For the past ten years, Rich Logsdon has been Senior Editor for the small print literary magazine Red Rock Review. One of the most prestigious magazines in the Southwest, Red Rock Review has featured works by many outstanding writers. He is also a prolific writer of short stories, which have appeared in many on-line journals and a few print magazines. Along with colleagues Todd Moffett and Tina Eliopulos, he has authored several college textbooks. His most recent textbook is titled Red Rock Reader, the second edition of which was published by Pearson in the fall of 2005. Dr. Logsdon is currently working on a novel.

Richard Logsdon received his Ph. D. in Eighteenth Century English literature from the University of Oregon in 1976 and has taught at CCSN as a full-time professor since 1975. He has also won several teaching awards.

Todd Moffett is a professor of English at the Community College of Southern Nevada and is an editor of "Red Rock Review."

Tina D. Eliopulos is a professor of English at the Community College of Southern Nevada and is an editor of "Red Rock Review."