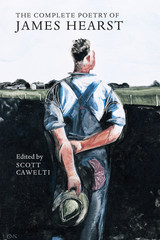 "James Hearst wrote eloquently of the land, its pleasures and sorrows, carefully turning the language as one of his farmer heroes turns the soil. Scott Cawelti and his colleagues have done us all a favor by assembling this fine collection, ensuring the onward resonance of Hearst's words and sensibilities."--Robert James Waller
" 'Write about what you know!' was the only advice given by the shy published poet to the shy girl who walked from her college to his farm, having begun to discover what she knew by crafting poems. Surely James Hearst knew pain and loss in plenty, but once he had sworn never again to 'uncover [his] door' to this kind of 'rain,' the world pitchforked its bounties to him through every window available to a poet. The results run from the perfect early nature lyric, 'Blue Again,' to the moving and rich domestic wisdom of 'Close Call.' This book is a late, uneven harvest, but a fine one."--Mona Van Duyn, U.S. Poet Laureate, 1992-1993

Part of the regionalist movement that included Grant Wood,

SCOTT CAWELTI is professor of English at the University of Northern Iowa. He is the author of The Inventive Writer and Introduction to College Writing. He also writes a weekly column for the Waterloo Courier and has been a commentator for National Public Radio.

In keeping with the tradition of small regional presses and fine printers-especially Prairie Press, which published Hearst's poetry throughout his lifetime-this edition was designed in collaboration with the University of Iowa Center for the Book.
REQUEST ACCESSIBLE FILE