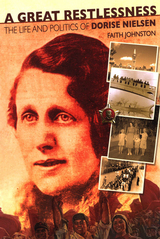 Dorise Nielsen was a pioneering feminist, a radical politician, the first Communist elected to Canadaís House of Commons, and the only woman elected in 1940. But despite her remarkable career, until now little has been known about her.From her youth in London during World War I to her burial in 1980 in a heroís cemetery in China, Nielsen lived through tumultuous times. Struggling through the Great Depression as a homesteaderís wife in rural Saskatchewan, Nielsen rebelled against the poverty and injustice that surrounded her, and found like-minded activists in the CCF and the Communist Party of Canada. In 1940 when leaders of the Communist Party were either interned or underground, Nielsen became their voice in Parliament. But her activism came at a high price. As a single mother in Ottawa, she sacrificed a close relationship with her family for her career. As a woman in an emerging political organisation, her authority was increasingly usurped by younger male party members. As a committed communist, she moved to Mao's China in 1957 and dedicated her lifeís work to a cause that went seriously awry.Faith Johnston illuminates the life of a woman who paved the way for a generation of women in politics, who tried to be both a good mother and a good revolutionary, and who refused to give up on either.
TABLE OF CONTENTS
Cover
TABLE OF CONTENTS
ACKNOWLEDGEMENTS
PROLOGUE
SASKATCHEWAN
1. Coming to Canada
2. Slavery or Freedom?
3. The United Progressives
4. A Mighty Effort
OTTAWA
5. Fighting for the West
6. Escaping the Net
7. Supporting the War
8. Parenting
9. Working for a New World
10. Victory and Defeat
TORONTO
11. Spies
12. Women and Peace
13. Fear and Discontent
BEIJING
14. Gung Ho
15. Alone
16. Revolution
17. Coming Home
18. The Last Act
EPILOGUE
ENDNOTES
BIBLIOGRAPHY
C
H
L
N
P
S
W
Z