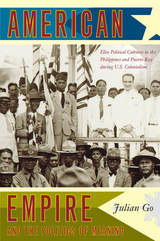 When the United States took control of the Philippines and Puerto Rico in the wake of the Spanish-American War, it declared that it would transform its new colonies through lessons in self-government and the ways of American-style democracy. In both territories, U.S. colonial officials built extensive public school systems, and they set up American-style elections and governmental institutions. The officials aimed their lessons in democratic government at the political elite: the relatively small class of the wealthy, educated, and politically powerful within each colony. While they retained ultimate control for themselves, the Americans let the elite vote, hold local office, and formulate legislation in national assemblies.

American Empire and the Politics of Meaning is an examination of how these efforts to provide the elite of Puerto Rico and the Philippines a practical education in self-government played out on the ground in the early years of American colonial rule, from 1898 until 1912. It is the first systematic comparative analysis of these early exercises in American imperial power. The sociologist Julian Go unravels how American authorities used “culture” as both a tool and a target of rule, and how the Puerto Rican and Philippine elite received, creatively engaged, and sometimes silently subverted the Americans’ ostensibly benign intentions. Rather than finding that the attempt to transplant American-style democracy led to incommensurable “culture clashes,” Go assesses complex processes of cultural accommodation and transformation. By combining rich historical detail with broader theories of meaning, culture, and colonialism, he provides an innovative study of the hidden intersections of political power and cultural meaning-making in America’s earliest overseas empire.

Julian Go is Assistant Professor of Sociology at Boston University. He is a coeditor of The American Colonial State in the Philippines: Global Perspectives, also published by Duke University Press.


“Julian Go has made a significant contribution to the study of the too rarely examined American empire, and imperial encounters generally, as well as to comparative cultural theory. . . . Go’s study not only creatively employs semiotics, but it is also well informed by the secondary literature and relevant documentary collections.” - Frederick F. Travis, Journal of American History


“Go’s American Empire makes an important contribution to debates over imperialism. . . . [B]y focusing on local experience during U.S. occupation, [Go] places American empire in a global framework. . . . Instead of attempting to internationalize U.S. history by emphasizing novel groups or ideas that Americans encountered abroad, Go turns the table on the debate by delineating how U.S. ideals, signs, and practices affected change and were changed abroad by ‘others.’ For these reasons, I would recommend students of imperialism, cultural theory, postcolonial theory, amongst others, consider adding Go’s American Empire to their reading lists.” - Maureen Mahoney, H-Net Reviews


“Empire is rightly at the forefront of contemporary discussion, but the history of American empire is often neglected. In American Empire and the Politics of Meaning, Julian Go brings a rigorous comparison of Puerto Rico and the Philippines into the broader discussion. The book puts cultural sociology to work advancing knowledge of both colonialism and political elites and how these inform transformations in political culture. It deserves wide readership.”—Craig Calhoun, University Professor of the Social Sciences, New York University


“An important contribution of this book is the extensive genealogy Go offers of key ideological constructs in the political culture of the governing classes in the U. S., the Philippines, and Puerto Rico. . . . [A]ll students of imperial formations should seriously engage Go’s text as he leads us toward promising and productive lines of inquiry.” - Ileana María Rodríguez-Silva, A Contracorriente


“American Empire and the Politics of Meaning is the first sustained and deeply comparative study of the histories of the Philippines and Puerto Rico under American colonial rule. It injects a long overdue comparative jolt into both Philippine and Puerto Rican studies.”—Michael Salman, author of The Embarrassment of Slavery: Controversies over Bondage and Nationalism in the American Colonial Philippines


“Go has developed a brilliant schema for studying and categorizing the political and cultural development of elite politics in Puerto Rico and the Philippines during the early years of American rule.” - LELAND CONLEY BARROWS, Interventions


“Julian Go has developed an illuminating examination of elite male political cultures and strategies in Puerto Rico and the Philippines during the first two decades of U.S. colonial rule and military occupation. . . . I welcome Go’s comparison of Puerto Rico and the Philippines. It pushes all of us to think much more along global historical connection, rather than limiting ourselves to fields such as ‘Latin America’ and ‘Asia’ imposed by Cold-War area studies rubrics.” - Eileen J. Findlay, American Historical Review

1. Introduction: Colonialism and Culture in the American Empire 1

Chapter 3: Winning Hearts and Minds in the Philippines 93

Chapter 7: Cultural Revaluation in the Philippines 241