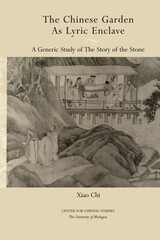 In this exploration of what has been called China's greatest novel, The Story of the Stone, Xiao Chi highlights the roles of the garden--both fictional and real--in dramatizing the cultural crisis of the literati in the late imperial period.
With his extensive knowledge of traditional Chinese fiction and a remarkably crafted history of the garden as an enduring feature of elite Chinese life, the author breaks new ground in understanding this important work. For Xiao, The Stone is a lament for the end of literati culture and an allegory for the transition of literati writing from the lyric to the prose tradition. It figures the decline of poetry and the "lyrical" lives of China's elite and the rise of both the novel and new social and cultural forms fueled by mercantilism. By focusing on the role of the garden in The Stone, Xiao Chi reveals the special linkages between the world of fiction, the world that produced the novel, and the narrative universe of the story itself.
Xiao Chi is senior lecturer in the Department of Chinese Studies, National University of Singapore. He has published two books in Chinese on lyricism and the aesthetics of poetry.
REQUEST ACCESSIBLE FILE