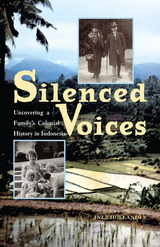 Like a number of Netherlanders in the post–World War II era, Inez Hollander only gradually became aware of her family’s connections with its Dutch colonial past, including a Creole great-grandmother. For the most part, such personal stories have been, if not entirely silenced, at least only whispered about in Holland, where society has remained uncomfortable with many aspects of the country’s relationship with its colonial empire.

Unlike the majority of memoirs that are soaked in nostalgia for tempo dulu, Hollander’s story sets out to come to grips with her family’s past by weaving together personal records with historical and literary accounts of the period. She seeks not merely to locate and preserve family memories, but also to test them against a more disinterested historical record. Hers is a complicated and sometimes painful personal journey of realization, unusually mindful of the ways in which past memories and present considerations can be intermingled when we seek to understand a difficult past. Silenced Voices is an important contribution to the literature on how Dutch society has dealt with its recent colonial history.

Inez Hollander teaches in the Dutch Studies Program at UC Berkeley. Her publications include The Road from Pompey’s Head: The Life and Work of Hamilton Basso and a memoir, Awakening from the American Dream.