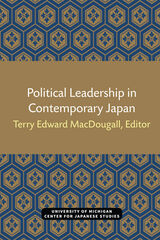 Those who do not read Japanese seldom have access to analytic studies of the fascinating and surprisingly diverse world of contemporary Japanese political leadership. This volume constitutes a step toward bringing to the English reader some sense of the norms, beliefs, styles, and modes of exercising power of Japanese political leaders and the organizational and political contexts which are changing leadership role expectations. The second volume in this series concentrates more explicitly on leadership recruitment, although the subject is also addressed here.
All of the essays in this volume highlight specific politicians, while attempting to develop analytic categories to understand the broader significance of these types of leaders. Included are the following: a Liberal Democratic Party prime minister and faction leader (Fukuda Takeo) who rose "almost effortlessly" to the pinnacle of power on the basis of an elitist educational and bureaucratic career background and another (Tanaka Kakuei) who took advantage of the chaotic wartime and immediate postwar period to overcome the limitations of his commoner background by developing an entrepreneurial style that makes him even today "the most powerful in Japan"; a younger conservative leader (Kono Yohei) who, with certain others of his generation, found life within the restrictive but predictable career paths of ruling Liberal Democrats less attractive than the risky option of forming his own New Liberal Club; an unconventional Socialist chairman (Asukata Ichio) who bucks the pull toward coalition making among the opposition parties in favor of his belief that this major but perpetual opposition party must first reconstruct itself and structure a new popular consensus that can legitimize a coalitional alternative to the Liberal Democrats; parliamentary leaders (like lower-house speaker Maeo Shigesaburo, directors of the House Management Committee, and heads of the Diet policy committees of the various parties) who are projected into increasingly influential roles by changing electoral trends and popular expectations; an innovative and dynamic mayor (Suzuki Heizaburo) who, taking advantage of the considerable authority afforded by Japan's "presidential" system of local chief executives, pursues his own priorities, mobilizing the requisite support despite the lack of national guidance and the oppositions of former backers; and the "power behind the throne" (Matsunaga Yasuzaemon and Komori Takeshi) whose visions move prime ministers and governors as well as their own followers in powerful public and private bureaucracies. [intro]
AUTHOR BIOGRAPHY
Terry Edward MacDougall is Professor Emeritus at Stanford University and former Director of the Stanford Japan Center.
TABLE OF CONTENTS
Cover
Title
Copyright
Contents
Introduction
Kanryō vs. Shomin: Contrasting Dynamics of Conservative Leadership in Postwar Japan
Liberal Democrats in Disarray: Intergenerational Conflict in the Conservative Camp
Asukata Ichio and Some Dilemmas of Socialist Leadership in Japan
Japanese Parties and Parliament: Changing Leadership Roles and Role Conflict
Mayoral Leadership in Japan: Whatrs in a Sewer Pipe?
Power Behind the Throne
Contributors
REQUEST ACCESSIBLE FILE