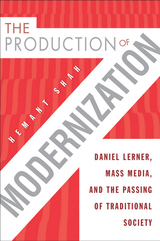 Daniel Lerner's 1958 book The Passing of Traditional Society was central in shaping Cold War–era ideas about the use of mass media and culture to promote social and economic progress in postcolonial nations. Based on a study of the effectiveness of propaganda in the Middle East, Lerner’s book claimed that exposure to American media messages could motivate “traditional” people in the postcolonial nations to become “modern” by cultivating empathy for American ideas, goods, and ways of life.

The Production of Modernization examines Lerner’s writings to construct the intellectual trajectory of his thinking about mass media and modernization up to and beyond the publication of his famous book. Shah has written not just an intellectual biography of Lerner but also a history of the discipline he shaped.

Hemant Shah is Professor in the School of Journalism and Mass Communication at the University of Wisconsin-Madison. He is coauthor (with Michael C. Thornton) of Newspaper Coverage of Interethnic Conflict: Competing Visions of America, and co-editor (with Michael Curtin) of Re-Orienting Global Communication: Indian and Chinese Media Beyond Borders.

1. Introduction: The Rise of Modernization Theory
2. Lerner at the Psychological Warfare Division
3. Lerner at Stanford: Tools of the Social Science Trade
4. Lerner at Columbia: The Voice of America's Turkey Studies
5. Lerner at MIT:
6. After Passing of Traditional Society
Bibliography
Figure
Tables