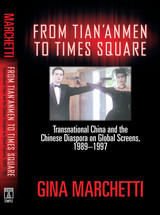 Global perceptions of China have changed dramatically since the massive student protests that took place in Tian'anmen Square in April 1989. The media spotlight trained on Beijing, and the international uproar over the events of that spring still shape the world's perceptions of the People's Republic and the ways that Chinese people, within and beyond China, see and portray themselves.In From Tian'anmen to Times Square, leading film scholar Gina Marchetti considers the complex changes in the ways that China and the Chinese have been portrayed in cinema and media arts since the Tian'anmen revolt. Drawing on her interviews with leading contemporary Chinese filmmakers, Marchetti looks at a wide range of work by Chinese and non-Chinese media artists working in China, Hong Kong, Taiwan, and Singapore and on transnational co-productions involving those places. Focusing on the intersections of race, ethnicity, gender, and sexuality on global screens, Marchetti traces the momentous political, cultural, social, and economic forces confronting contemporary media artists and filmmakers working within "Greater China."
AUTHOR BIOGRAPHY
Gina Marchetti is Associate Professor in the School of Cinema and Photography at Ithaca College and a Visiting Professor at the University of Hong Kong. She is the author of Romance and the "Yellow Peril": Race, Sex, and Discursive Strategies in Hollywood Fiction, which won the 1995 Association for Asian American Studies National Book Award in Cultural Studies.