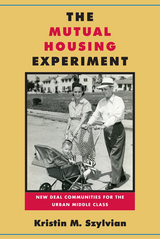 In 1940, the U.S. Federal Works Agency created an experimental housing program for industrial workers. Eight model communities were leased and later sold to the residents, who formed a non-profit corporation called a mutual housing association. Further development of housing under the mutual housing plan was stymied by controversies around radical politics and race, and questions over whether the federal government should be involved in housing policy.

In The Mutual Housing Experiment, Kristin Szylvian examines 32 mutual housing associations that are still in existence today, and offers strong evidence to show that federal public housing policy was not the failure that critics allege. She explains that mutual home ownership has not only proven its economic value, but has also given rise to communities characterized by a strong sense of identity and civic engagement.

The book shows that this important period in urban and housing policy provides critical lessons for contemporary housing analysts who continue to emphasize traditional home ownership for all wage-earners despite the home mortgage crisis of 2008.
AUTHOR BIOGRAPHY
Kristin M. Szylvian is Associate Professor of History and Library and Information Science at St. John's University in New York City.
REVIEWS

"Szylvian treats readers to the fruits of her extensive research locating and piecing together the records of many government agencies and individuals...to tell the story of the mutual housing program during and immediately after WWII. The Federal Works Agency created the Mutual Plan, but the WWII housing crisis (the 1940s are an understudied era in housing policy) provided a critical opportunity for reformers committed to cooperative housing. Szylvian traces the origins of the Mutual Plan and then focuses on eight projects in five states.... Primarily, though, the author’s intent was to detail policy struggles and widespread lack of political support; mutual housing projects remained an 'experiment' rather than a stepping-stone to a new housing policy. The epilogue provides a look at a few of the communities today and includes statements from the residents themselves, emphasizing the connection between policy and people. Summing Up: Recommended."
—CHOICE