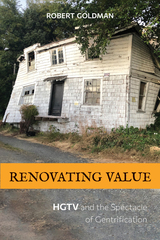 HGTV has perfected stories about creating and capturing value in the housing market. But according to Robert Goldman, this lifestyle network’s beloved flagship programs, Flip or Flop, Property Brothers, and Fixer Upper—where people revitalize modern spaces and reinvent property values—offer “fairy tales” in the wake of the 2008 economic crisis. The cable channel’s seductive, bingeable programs may show how to find and extract value from properties, but, in fact, they insidiously ignore the realities of the real estate and mortgage markets, housing inequality, gentrification, economic insecurity, and even homelessness. In effect, HGTV has turned house flipping into a master narrative about getting ahead in America during an era of otherwise uneasy economic prospects.

HGTV pictures its insular moral economy as an alternative to a crisis-ridden neoliberal finance system that shaped landscapes of foreclosure and financial uncertainty for millions of households. Renovating Value explores the circuitry of consumer credit and debt, and a rent-gap model of gentrification that charts a path to the rehabilitation of Value. Goldman shrewdly critiques the aspirational myth of adding value to a home simply by using imagination, elbow grease, and aesthetic know-how.

Robert Goldman is a Professor Emeritus of Sociology at Lewis & Clark College. He is the author of Reading Ads Socially, and the coauthor with Stephen Papson of Sign Wars: The Cluttered Landscape of Advertising; Nike Culture: The Sign of the Swoosh; and Landscapes of Capital: Representing Time, Space, and Globalization in Corporate Advertising.

TABLE OF CONTENTS
Contents
Preface
Acknowledgments
Introduction: Once upon a Time in a Salvage Economy
1. A Primer on Value in the Age of HGTV
2. Renovation Narratives
3. A Moment in the Life of Capital
4. Gentrification TV
5. Creative Erasure
6. A Promised Land of Instant Equity
7. HGTV ’s Value Theories of Labor
8. Masking the New Rules of Value
Epilogue: Must-Haves—Four Walls and a Roof
Notes
Bibliography
Index
REQUEST ACCESSIBLE FILE