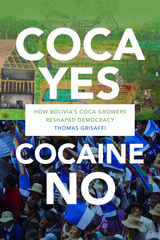 In Coca Yes, Cocaine No Thomas Grisaffi traces the political ascent and transformation of the Movement toward Socialism (MAS) from an agricultural union of coca growers into Bolivia's ruling party. When Evo Morales—leader of the MAS—became Bolivia's president in 2006, coca growers celebrated his election and the possibility of scaling up their form of grassroots democracy to the national level. Drawing on a decade of ethnographic fieldwork with coca union leaders, peasant farmers, drug traffickers, and politicians, Grisaffi outlines the tension that Morales faced between the realities of international politics and his constituents, who, even if their coca is grown for ritual or medicinal purposes, are implicated in the cocaine trade and criminalized under the U.S.-led drug war. Grisaffi shows how Morales's failure to meet his constituents' demands demonstrates that the full realization of alternative democratic models at the local or national level is constrained or enabled by global political and economic circumstances.
AUTHOR BIOGRAPHY
Thomas Grisaffi is Lecturer in the Department of Geography and Environmental Science at the University of Reading.
REVIEWS
"By combining ethnographic insight with structural analysis, the book makes an important methodological contribution, one that demands a closer dialogue between the ?elds of critical anthropology and global political economy. ... Coca Yes, Cocaine No is a terri?c success that will prove indispensable for critical-minded students and researchers of contemporary Latin American politics and society."

"In this vivid ethnographic account, Grisaffi shows how Bolivian coca growers grew from a criminalized union to a strong social movement with a vernacular vision of 'radical democracy.' ... A fascinating case study [that] shows that the conditions for realization of alternative democracies locally are always linked to broader political economic forces."

"Grisaffi’s book is required reading for anyone interested in contemporary Bolivian politics."

“Thomas Grisaffi’s engaging ethnography argues that in the Chapare region of Bolivia, the cocalero (coca growers) union has developed an innovative form of grassroots democracy. Coca Yes, Cocaine No achieves the rare feat of speaking meaningfully to both undergraduate readers and scholars (of Latin American studies, anthropology, social movements, and political theorists) and I expect it will be adopted widely for undergraduate and graduate courses.”

“Coca Yes, Cocaine No is a valuable resource for anyone interested in the relations between local and national forms of governance and democracy, and particularly for anyone who wishes to understand democracy in Bolivia during Morales’ presidency.”

“In addition to the quality of his writing and clarity of his argument, the judicious and continuous integration of primary data makes this book captivating and vivid. Through ethnographic vignettes and detailed descriptions of the relationships between the author and the actors of his research, Grisaffi manages to bring the atmosphere of the Chapare region to life for the reader…. This study [is] a significant contribution to the fields of Latin American Studies and drug politics—a topic of keen importance, which can shed light on other relevant issues, such as the depenalization and legalization of cannabis use in countries such as Uruguay and the USA.”

“This complex and interesting book makes a very important contribution to scholarship on grassroots democracy, indigenous movements, the war on drugs in the Americas and Latin American politics.”