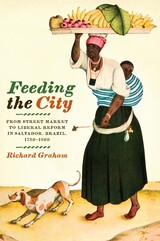 On the eastern coast of Brazil, facing westward across a wide magnificent bay, lies Salvador, a major city in the Americas at the end of the eighteenth century. Those who distributed and sold food, from the poorest street vendors to the most prosperous traders—black and white, male and female, slave and free, Brazilian, Portuguese, and African—were connected in tangled ways to each other and to practically everyone else in the city, and are the subjects of this book. Food traders formed the city's most dynamic social component during the late eighteenth and early nineteenth centuries, constantly negotiating their social place. The boatmen who brought food to the city from across the bay decisively influenced the outcome of the war for Brazilian independence from Portugal by supplying the insurgents and not the colonial army. Richard Graham here shows for the first time that, far from being a city sharply and principally divided into two groups—the rich and powerful or the hapless poor or enslaved—Salvador had a population that included a great many who lived in between and moved up and down.

The day-to-day behavior of those engaged in food marketing leads to questions about the government's role in regulating the economy and thus to notions of justice and equity, questions that directly affected both food traders and the wider consuming public. Their voices significantly shaped the debate still going on between those who support economic liberalization and those who resist it.

Richard Graham is Frances Higginbotham Nalle Centennial Professor of History Emeritus at the University of Texas at Austin. He is the author of Patronage and Politics in Nineteenth-Century Brazil; Britain and the Onset of Modernization in Brazil; Independence in Latin America: A Comparative Approach; and several edited books, including The Idea of Race in Latin America, 1870–1940 and Machado de Assis: Reflections on the Brazilian Master Writer.

REVIEWS
This is an exemplary work of social history that would benefit scholars interested in both slave societies and urban provisioning.
— Journal of Social History