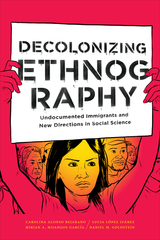 In August 2011, ethnographers Carolina Alonso Bejarano and Daniel M. Goldstein began a research project on undocumented immigration in the United States by volunteering at a center for migrant workers in New Jersey. Two years later, Lucia López Juárez and Mirian A. Mijangos García—two local immigrant workers from Latin America—joined Alonso Bejarano and Goldstein as research assistants and quickly became equal partners for whom ethnographic practice was inseparable from activism. In Decolonizing Ethnography the four coauthors offer a methodological and theoretical reassessment of social science research, showing how it can function as a vehicle for activism and as a tool for marginalized people to theorize their lives. Tacking between personal narratives, ethnographic field notes, an original bilingual play about workers' rights, and examinations of anthropology as a discipline, the coauthors show how the participation of Mijangos García and López Juárez transformed the project's activist and academic dimensions. In so doing, they offer a guide for those wishing to expand the potential of ethnography to serve as a means for social transformation and decolonization.
AUTHOR BIOGRAPHY
Carolina Alonso Bejarano is an activist scholar and writer who teaches in the Department of Latino and Caribbean Studies at Rutgers University. She is also a DJ and an editor, translator and collective member of Sangría Editora.

Lucia López Juárez is an activist who fights for equal rights for all people, a domestic worker, and a mother who cares for her home.

Mirian A. Mijangos García is a singer, songwriter, and naturopath. She is also a mother, an ethnographer, and an immigrants' rights activist.

Daniel M. Goldstein is Professor Emeritus of Anthropology at Rutgers University and author of Owners of the Sidewalk: Security and Survival in the Informal City, also published by Duke University Press.
REVIEWS
-- Angela Stuesse, author of Scratching Out a Living: Latinos, Race, and Work in the Deep South