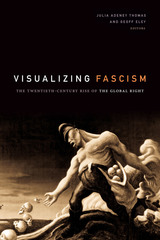 Visualizing Fascism argues that fascism was not merely a domestic menace in a few European nations, but arose as a genuinely global phenomenon in the early twentieth century. Contributors use visual materials to explore fascism's populist appeal in settings around the world, including China, Japan, South Africa, Slovakia, and Spain. This visual strategy allows readers to see the transnational rise of the right as it fed off the agitated energies of modernity and mobilized shared political and aesthetic tropes. This volume also considers the postwar aftermath as antifascist art forms were depoliticized and repurposed in the West. More commonly, analyses of fascism focus on Italy and Germany alone and on institutions like fascist parties, but that approach truncates our understanding of the way fascism was indebted to colonialism and internationalism with all their attendant grievances and aspirations. Using photography, graphic arts, architecture, monuments, and film—rather than written documents alone—produces a portable concept of fascism, useful for grappling with the upsurge of the global right a century ago—and today.


-- Takashi Fujitani, author of Race for Empire: Koreans as Japanese and Japanese as Americans during WWII