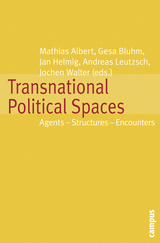 From a decidedly multidisciplinary perspective, the articles in Transnational Political Spaces address the notion that political space is no longer fully congruent with national borders. Instead there are areas called transnational political spaces—caused by factors such as migration and social transformation—where policy occurs oblivious to national pressure. Organized into three sections—transnational actors, transnational spaces, and critical encounters—this volume explains how these spaces are formed and defined and how they can be traced and conceptualized.