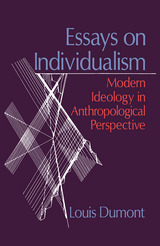 Louis Dumont's Essays on Individualism is an ambitious attempt to place the modern ideology of individualism in a broad anthropological perspective. The result of twenty years of scholarship and inquiry, the interrelated essays gathered here not only trace the genesis and growth of individualism as the dominant force in Western philosophy, but also analyze the differences between this modern system of thought and those of other, nonmodern cultures. The collection represents an important contribution to Western society's understanding of itself and its place in the world.
TABLE OF CONTENTS


Preface to the English Edition
Introduction
Part 1 - On Modern Ideology
1. Genesis, I
The Christian Beginnings: From the Outwardly Individual to the Individual-in-the-world
2. Genesis, II
The Political Category and the State from the Thirteenth Century Onward
1. Introduction
2. Thomas Aquinas and William of Ockham
3. From Church Supremacy to Political Sovereignty
4. Modern Natural Law
5. The Equalitarian and Possessive Implications of Individualism
6. Hobbes's Leviathan
7. Rousseau's "Contract social"
8. The Declaration of the Rights of Man
9. The Aftermath of the Revolution: Universitas Reborn
3. Genesis, III
The Emergence of the Economic Category: A Reminder
4. A National Variant, I
German Identity: Herder's Volk and Fichte's Nation
5. A National Variant, II
The German Idea of Liberty According to Troeltsch
6. The Totalitarian Disease: Individualism and Racism in Adolf Hitler's Representations
Part 2 - Comparison Made Radical: The Universal Viewed Anthropologically
7. Marcel Mauss: A Science in Process of Becoming
8. The Anthropological Community and Ideology
1. The Discipline in Its Relation to Ideologies
2. Where Equalitarianism Is Not in Place
9. On Value, Modern and Nonmodern
Works Cited
Glossary
Author Index