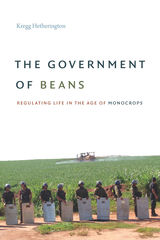 The Government of Beans is about the rough edges of environmental regulation, where tenuous state power and blunt governmental instruments encounter ecological destruction and social injustice. At the turn of the twenty-first century, Paraguay was undergoing dramatic economic, political, and environmental change due to a boom in the global demand for soybeans. Although the country's massive new soy monocrop brought wealth, it also brought deforestation, biodiversity loss, rising inequality, and violence. Kregg Hetherington traces well-meaning attempts by bureaucrats and activists to regulate the destructive force of monocrops that resulted in the discovery that the tools of modern government are at best inadequate to deal with the complex harms of modern agriculture and at worst exacerbate them. The book simultaneously tells a local story of people, plants, and government; a regional story of the rise and fall of Latin America's new left; and a story of the Anthropocene writ large, about the long-term, paradoxical consequences of destroying ecosystems in the name of human welfare.
AUTHOR BIOGRAPHY
Kregg Hetherington is Associate Professor of Anthropology at Concordia University. He is the editor of Infrastructure, Environment, and Life in the Anthropocene and author of Guerrilla Auditors: The Politics of Transparency in Neoliberal Paraguay, both also published by Duke University Press.
REVIEWS
-- Tania Murray Li, author of Land’s End: Capitalist Relations on an Indigenous Frontier