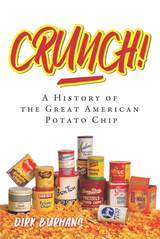 The potato chip has been one of America's favorite snacks since its accidental origin in a nineteenth-century kitchen. Crunch! A History of the Great American Potato Chip tells the story of this crispy, salty treat, from the early sales of locally made chips at corner groceries, county fairs, and cafes to the mass marketing and corporate consolidation of the modern snack food industry.

Crunch! also uncovers a dark side of potato chip history, including a federal investigation of the snack food industry in the 1990s following widespread allegations of antitrust activity, illegal buyouts, and predatory pricing. In the wake of these "Great Potato Chip Wars," corporate snack divisions closed and dozens of family-owned companies went bankrupt. Yet, despite consolidation, many small chippers persist into the twenty-first century, as mom-and-pop companies and upstart "boutique" businesses serve both new consumers and markets with strong regional loyalties.

Illustrated with images of early snack food paraphernalia and clever packaging from the glory days of American advertising art, Crunch! is an informative tour of large and small business in America and the vicissitudes of popular tastes.

AUTHOR BIOGRAPHY
Dirk Burhans grew up in the heart of traditional potato chip country in eastern Ohio. He is a past publisher of the magazine Burger Boy and writes for magazines about potato chips, soda pop, and hamburger chains. He lives in Idaho.
REVIEWS

“The appealing tale of how the pedestrian potato was transformed into America’s favorite snack food.”—Margaret Engel, coauthor (with Allison Engel) of Food Finds: America’s Best Local Foods and the People Who Produce Them

“Dirk Burhans has a knack for seeking out cool, interesting businesses and, more importantly, the people who make them hum. You’ll have no better guide through the little-known but fascinating world of regional potato chips.”—Brian Butko, author of Klondikes, Chipped Ham, & Skyscraper Cones

6. Trust and Antitrust: The Case against Frito-Lay

7. A Matter of Taste: Ohio and Pennsylvania

8. A Few of Our Favorite Things: Fats, Carbs, and Calories

9. Everything Old Is New Again