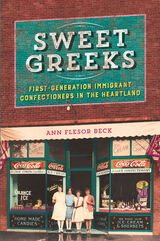 Gus Flesor came to the United States from Greece in 1901. His journey led him to Tuscola, Illinois, where he learned the confectioner's trade and opened a business that still stands on Main Street. Sweet Greeks sets the story of Gus Flesor's life as an immigrant in a small town within the larger history of Greek migration to the Midwest.

Ann Flesor Beck's charming personal account recreates the atmosphere of her grandfather's candy kitchen with its odors of chocolate and popcorn and the comings-and-goings of family members. "The Store" represented success while anchoring the business district of Gus's chosen home. It also embodied the Midwest émigré experience of chain migration, immigrant networking, resistance and outright threats by local townspeople, food-related entrepreneurship, and tensions over whether later generations would take over the business.

An engaging blend of family memoir and Midwest history, Sweet Greeks tells how Greeks became candy makers to the nation, one shop at a time.

AUTHOR BIOGRAPHY
Ann Flesor Beck is a third-generation Greek confectioner and independent scholar. With her sister, she co-owns and operates Flesor's Candy Kitchen in Tuscola, Illinois.
REVIEWS
"The stories in the book are still relevant today, and the midwestern history is easy to devour because the places are familiar. . . . This book paired with some sweets from Flesor’s Candy Kitchen would be perfect for anyone in central Illinois with a sweet tooth." --Smile Politely


​"This remarkable story is both unique and universal. It is the story of tenacious immigrant entrepreneurs overcoming enormous odds to find that sweet spot, making candy that would become a permanent feature of American daily life."--Ken Albala, author of Noodle Soup: Recipes, Techniques, Obsession


"The value of Sweet Greeks rests in its recovery of the names and personal stories of immigrant confectioners operating candy stores in small, Midwestern towns. Once an important niche for Greek entrepreneurs, candy stores also provided community spaces. Then they disappeared. Could their revival breathe life into rural communities?"--Donna Gabaccia, coauthor of Gender and Migration: From the Slavery Era to the Global Age

Chapter 4. Finding a Niche in Chicago and St. Louis

Chapter 6. My Grandfather and His Mentors