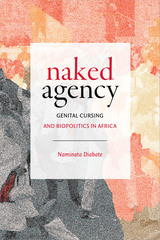 Across Africa, mature women have for decades mobilized the power of their nakedness in political protest to shame and punish male adversaries. This insurrectionary nakedness, often called genital cursing, owes its cultural potency to the religious belief that spirits residing in women's bodies can be unleashed to cause misfortune in their targets, including impotence, disease, and death. In Naked Agency, Naminata Diabate analyzes these collective female naked protests in Africa and beyond to broaden understandings of agency and vulnerability. Drawing on myriad cultural texts from social media and film to journalism and fiction, Diabate uncovers how women create spaces of resistance during socio-political duress, including such events as the 2011 protests by Ivoirian women in Côte d’Ivoire and Paris as well as women's disrobing in Soweto to prevent the destruction of their homes. Through the concept of naked agency, Diabate explores fluctuating narratives of power and victimhood to challenge simplistic accounts of African women's helplessness and to show how they exercise political power in the biopolitical era.
AUTHOR BIOGRAPHY
Naminata Diabate is Assistant Professor of Comparative Literature at Cornell University.
REVIEWS
“This is an expansive but nuanced and thought-provoking study of female nakedness as political intervention around Africa. Naked Agency offers a rich analysis of the many potential meanings of defiant disrobing as a signifying shorthand in relation to questions of agency within, but also potentially outside of an African context.”

“Bringing new insights to discussions of biopolitics and subjectivity, Naminata Diabate explores African women's naked protests to illuminate the contradictory nature of women's agency and the paradox of aggressive disrobing as a counter to globalization that depends on the globalized meaning of state power. She also makes a strong case for avoiding the problems found in most writings on African women of seeing women as either victims or heroic agents while doing an especially great job of exposing the double-edged nature of secularization in the postcolonial world.”

-- E. Frances White, author of Dark Continent of Our Bodies: Black Feminism and the Politics of Respectability