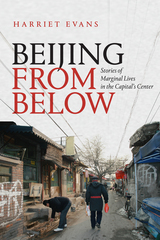 Between the early 1950s and the accelerated demolition and construction of Beijing's “old city” in preparation for the 2008 Olympics, the residents of Dashalar—one of the capital city's poorest neighborhoods and only a stone's throw from Tian’anmen Square—lived in dilapidated conditions without sanitation. Few had stable employment. Today, most of Dashalar's original inhabitants have been relocated, displaced by gentrification. In Beijing from Below Harriet Evans captures the last gasps of subaltern life in Dashalar. Drawing on oral histories that reveal memories and experiences of several neighborhood families, she reflects on the relationships between individual, family, neighborhood, and the state; poverty and precarity; gender politics and ethical living; and resistance to and accommodation of party-state authority. Evans contends that residents' assertion of belonging to their neighborhood signifies not a nostalgic clinging to the past, but a rejection of their marginalization and a desire for recognition. Foregrounding the experiences of the last of Dashalar's older denizens as key to understanding Beijing's recent history, Evans complicates official narratives of China's economic success while raising crucial questions about the place of the subaltern in history.
AUTHOR BIOGRAPHY
Harriet Evans is Emeritus Professor of Chinese Cultural Studies at the University of Westminster and Visiting Professor in Anthropology at the London School of Economics. She is the author of The Subject of Gender: Daughters and Mothers in Urban China and Women and Sexuality in China.
REVIEWS
-- Rebecca E. Karl, author of The Magic of Concepts: History and the Economic in Twentieth-Century China