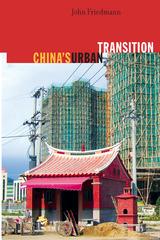 Though China's urban history reaches back over five thousand years, it is only in the last quarter century that urbanization has emerged as a force of widespread social transformation while a massive population shift from country to city has brought about a dramatic revolution in China's culture, politics, and economy. Employing a historical perspective, John Friedmann presents a succinct, readable account and interpretation of how this transition - one of the most momentous phenomena in contemporary history - has occurred. China's Urban Transition synthesizes a broad array of research to provide the first integrated treatment of the many processes that encompass the multi-layered meaning of urbanization: regional policy, the upsurge of rural industries, migration, expanding spheres of personal autonomy, and the governance of city building. John Friedmann's detailed analysis suggests that the nation's economic development has been driven more by social forces from within than by global capital. This leads directly to the epic story of rural migration to major urban regions, the policies used to restrain and direct this "avalanche" of humanity on the move, and the return of many migrants to their home communities, where the process of urbanization continues. Focusing on everyday life in cities, he also shows how this social transformation extends to the most intimate spheres of people's lives. In conclusion, the author raises the question of a "sustainable" urban development and its relation with China's own past, values, and institutions. Friedmann predicts that within ten years China - already the most powerful country in East Asia - will have become a major power in the world. With historical depth, interpretive insight, and interdisciplinary breadth, this book offers an unparalleled introduction to China's transformation.
AUTHOR BIOGRAPHY
John Friedmann is professor emeritus in the School of Public Policy and Social Research at the University of California, Los Angeles, and honorary professor in the Faculty of Graduate Studies at the University of British Columbia. He is the author of many distinguished works, most recently The Prospect of Cities (Minnesota, 2002).
TABLE OF CONTENTS