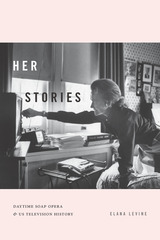 Since the debut of These Are My Children in 1949, the daytime television soap opera has been foundational to the history of the medium as an economic, creative, technological, social, and cultural institution. In Her Stories, Elana Levine draws on archival research and her experience as a longtime soap fan to provide an in-depth history of the daytime television soap opera as a uniquely gendered cultural form and a central force in the economic and social influence of network television. Closely observing the production, promotion, reception, and narrative strategies of the soaps, Levine examines two intersecting developments: the role soap operas have played in shaping cultural understandings of gender and the rise and fall of broadcast network television as a culture industry. In so doing, she foregrounds how soap operas have revealed changing conceptions of gender and femininity as imagined by and reflected on the television screen.
AUTHOR BIOGRAPHY
Elana Levine is Professor of Media, Cinema and Digital Studies in the Department of English at the University of Wisconsin–Milwaukee. She is the author of Wallowing in Sex: The New Sexual Culture of 1970s American Television, also published by Duke University Press; editor of Cupcakes, Pinterest, and Ladyporn: Feminized Popular Culture in the Early Twenty-First Century; and coauthor of Legitimating Television: Media Convergence and Cultural Status.
REVIEWS
-- Michele Hilmes, Professor Emerita of Media and Cultural Studies, University of Wisconsin-Madison


-- Lynn Spigel, author of TV by Design: Modern Art and the Rise of Network Television


-- Lynn Liccardo, Soap Opera Critic and author of as the world stopped turning...


Acknowledgments  vii
Introduction  1
Part I. The New TV Soap: Late 1940s to Early 1960s
1. Serials in Transition: From Radio to Television  19
2. Daytime Therapy: Help and Healing in the Postwar Soap  44
Part II. The Classic Network Era: Mid-1960s to Late 1980s
3. Building Network Power: The Broadcasting Business and the Craft of Soap Opera  73
4. Turning to Relevance: Social Issue Storytelling  106
5. Love in the Afternoon: The Fracturing Fantasies of the Soap Boom  153
Part III. A Post-Network Age: Late 1980s to 2010s
6. Struggles for Survival: Stagnation and Innovation 199
7. Reckoning with the Past: Reimagining Characters and Stories  236
8. Can Her Stories Go On? Soap Opera in a Digital Age  280
Notes  299
Bibliography  357
Index  369