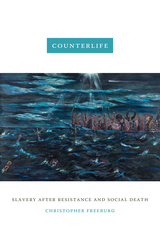 In Counterlife Christopher Freeburg poses a question to contemporary studies of slavery and its aftereffects: what if freedom, agency, and domination weren't the overarching terms used for thinking about Black life? In pursuit of this question, Freeburg submits that current scholarship is too preoccupied with demonstrating enslaved Africans' acts of political resistance, and instead he considers Black social life beyond such concepts. He examines a rich array of cultural texts that depict slavery—from works by Frederick Douglass, Radcliffe Bailey, and Edward Jones to spirituals, the television cartoon The Boondocks, and Quentin Tarantino's Django Unchained—to show how enslaved Africans created meaning through artistic creativity, religious practice, and historical awareness both separate from and alongside concerns about freedom. By arguing for the impossibility of tracing slave subjects solely through their pursuits of freedom, Freeburg reminds readers of the arresting power and beauty that the enigmas of Black social life contain.
AUTHOR BIOGRAPHY
Christopher Freeburg is Professor of English at the University of Illinois at Urbana-Champaign and author of Black Aesthetics and the Interior Life and Melville and the Idea of Blackness: Race and Imperialism in Nineteenth-Century America.
REVIEWS
“The boldness and ambition of Christopher Freeburg's Counterlife are apparent on every page. Freeburg challenges decades of work on U.S. slavery that highlights either slave resistance or white dominance, but often not more than that. As an alternative, Freeburg insists that we consider the many possibilities of both Black life during slavery and the ways that we now dare to imagine and reference that life.”

“Christopher Freeburg's theory of counterlife is the refreshing new grammar that breaks out of slavery studies' conscious and unconscious lapses into the binary of social death or social life. Counterlife adds crucial new dimensions to the study of the artistic representation of enslaved Africans. This bold, brilliant study teaches us how to stumble, with uncertainty and vulnerability, into the ever-expanding archive of slavery.”

“Counterlife is somewhat loosely defined. . . . The virtue of this more speculative approach is that it brings widely ranging works into dialogue with each other and takes seriously the ways in which writers might wish to write against moral and political expectations—not so much resisting slavery as resisting its dominant modes of representation.”