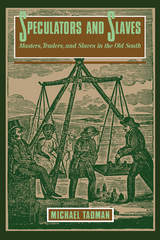 Speculators And Slaves: Masters, Traders, And Slaves In The Old South
by Michael Tadman
University of Wisconsin Press, 1996
Paper: 978-0-299-11854-9
In this groundbreaking work, Michael Tadman establishes that all levels of white society in the antebellum South were deeply involved in a massive interregional trade in slaves. Using countless previously untapped manuscript sources, he documents black resilience in the face of the pervasive indifference of slaveholders toward slaves and their families. This new paperback edition of Speculators and Slaves offers a substantial new Introduction that advances a major thesis of master-slave relationships. By exploring the gulf between the slaveholders’ self-image as benevolent paternalists and their actual behavior, Tadman critiques the theories of close accommodation and paternalistic hegemony that are currently influential.
AUTHOR BIOGRAPHY
Michael Tadman is lecturer in economic and social history at the University of Liverpool.  His other published work includes a new edition of Frederic Bancroft’s 1931 classic, Slave Trading in the Old South.
REVIEWS
“This detailed, meticulously researched and documented analysis of the internal slave trade represents historical scholarship at its best. This study is must reading for all those interested in African-American history.”—Robert R. Davis, The American Historical Review


“Amid the steady stream of new books on the various aspects of antebellum history, here is one that makes a real difference.”—Gavin Wright, Journal of American History


“A model of demographic, social, and cultural history . . . tightly argued, beautifully written, and imaginatively proved.”—Laurence A. Glasco, The Historian