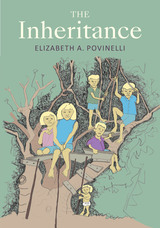 Elizabeth A. Povinelli’s inheritance was passed down not through blood or soil but through a framed map of Trentino, Alto Adige—the region where family's ancestral alpine village is found. Far more than a map hanging above the family television, the image featured colors and lines that held in place the memories and values fueling the Povinelli family's fraught relationships with the village and with each other. In her graphic memoir The Inheritance, Povinelli explores the events, traumas, and powers that divide and define our individual and collective pasts and futures. Weaving together stories of her grandparents' flight from their village in the early twentieth century to the fortunes of their knife-grinding business in Buffalo, New York, and her own Catholic childhood in a shrinking Louisiana woodlands of the 1960s and 1970s, Povinelli describes the serial patterns of violence, dislocation, racism and structural inequality that have shaped not only her life but the American story. Plumbing the messy relationships among nationality, ethnicity, kinship, religion, and belonging, The Inheritance takes us into the gulf between the facts of history and the stories we tell ourselves to survive and justify them.
AUTHOR BIOGRAPHY
Elizabeth A. Povinelli is Franz Boas Professor of Anthropology and Gender Studies at Columbia University and a founding member of the Karrabing Film Collective. Her most recent book is Geontologies: A Requiem to Late Liberalism, also published by Duke University Press.
REVIEWS
“With the understanding of a scholar and the storytelling instincts of a novelist, Elizabeth A. Povinelli has brought a rare degree of scope and insight to the graphic memoir form. Relatively few illustrated works are so complex and insightful, so intricately concerned with families, nationalities, and politics. An extraordinary book.”

-- Michael Cunningham, author of The Hours

“A melancholy yet often darkly funny reflection on the intersections of biography, geography, kinship, and history, The Inheritance is a genuinely original work that made an impact on this reader and will leave a lasting mark on the field.”

-- Naisargi N. Dave, author of Queer Activism in India: A Story in the Anthropology of Ethics

"An inspired use of the graphic format to weave a narrative with a power beyond words alone." (Starred Review)

"This book is memoir, art, and anthropology, as it cleverly addresses the interplay between individual lives and collective experiences, thus inviting a more open and associative mode of interpretation than most academic monographs.… This text handles complex and contested social themes through sparing text and provocative imagery and as such is a unique contribution to the conversation on the legacies of European immigration to the United States."