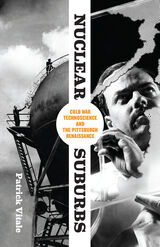 During the early Cold War, research facilities became ubiquitous features of suburbs across the United States. Pittsburgh’s eastern and southern suburbs hosted a constellation of such facilities that became the world’s leading center for the development of nuclear reactors for naval vessels and power plants. The segregated communities that surrounded these laboratories housed one of the largest concentrations of nuclear engineers and scientists on earth. In Nuclear Suburbs, Patrick Vitale uncovers how the suburbs shaped the everyday lives of these technology workers.

Using oral histories, Vitale follows nuclear engineers and scientists throughout and beyond the Pittsburgh region to understand how the politics of technoscience and the Cold War were embedded in daily life. At the same time that research facilities moved to Pittsburgh’s suburbs, a coalition of business and political elites began an aggressive effort, called the Pittsburgh Renaissance, to renew the region. For Pittsburgh’s elite, laboratories and researchers became important symbols of the new Pittsburgh and its postindustrial economy. Nuclear Suburbs exposes how this coalition enrolled technology workers as allies in their remaking of the city.

Offering lessons for the present day, Nuclear Suburbs shows how race, class, gender, and the production of urban and suburban space are fundamental to technoscientific networks, and explains how the “renewal” of industrial regions into centers of the tech economy is rooted in violence and injustice.

Patrick Vitale is assistant professor of geography in the Department of Political Science, Philosophy, and Geography at Eastern Connecticut State University.

1. Going Critical: Technoscience, the Cold War, and the Pittsburgh Renaissance

2. Research and Renaissance: Renewing the City for Scientists

3. The Invention of Research Man

4. The Monroeville Doctrine: How the Suburbs Shaped Cold War Science

5. Finding a Home in the Nuclear Suburbs

Epilogue: Did Science Save Pittsburgh?