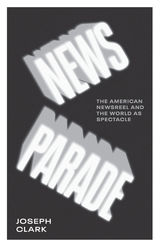 A fascinating look at the United States’ conflicted relationship with news and the media, through the lens of the newsreel

When weekly newsreels launched in the early twentieth century, they offered the U.S. public the first weekly record of events that symbolized “indisputable evidence” of the news. In News Parade, Joseph Clark examines the history of the newsreel and how it changed the way Americans saw the world. He combines an examination of the newsreel’s methods of production, distribution, and reception with an analysis of its representational strategies to understand the newsreel’s place in the history of twentieth-century American culture and film history.

Clark focuses on the sound newsreel of the 1930s and 1940s, arguing that it represents a crucial moment in the development of a spectacular society where media representations of reality became more fully integrated into commodity culture. Using several case studies, including the newsreel’s coverage of Charles Lindbergh’s transatlantic flight and the Sino–Japanese War, News Parade shows how news film transformed the relationship between its audience and current events, as well as the social and political consequences of these changes. It pays particular attention to how discourses of race and gender worked together with the rhetoric of speed, mobility, and authority to establish the power and privilege of newsreel spectatorship.

In the age of fake news and the profound changes to journalism brought on by the internet, News Parade demonstrates how new technologies and media reshaped the American public’s relationship with the news in the 1930s—a history that can help us to better understand the transformations happening today.

Joseph Clark is lecturer in the School for the Contemporary Arts at Simon Fraser University.

1. News Parade: The Logic of the Newsreel System

3. “Heroes of the Lens”: Newsreel Cameramen, the Sino-Japanese War, and Looking as Action

4. “Come Along. We’re Going to the Trans-Lux to Hiss Roosevelt”: Modernity, Virtual Travel and the Newsreel Cinema as Public Forum