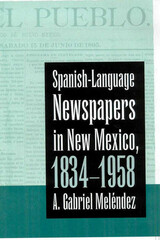 Spanish-Language Newspapers in New Mexico, 1834-1958
by A. Gabriel Meléndez
University of Arizona Press, 2005
Paper: 978-0-8165-2472-3
For more than a century, Mexican American journalists used their presses to voice socio-historical concerns and to represent themselves as a determinant group of communities in Nuevo México, a particularly resilient corner of the Chicano homeland. This book draws on exhaustive archival research to review the history of newspapers in these communities from the arrival of the first press in the region to publication of the last edition of Santa Fe’s El Nuevo Mexicano. Gabriel Meléndez details the education and formation of a generation of Spanish-language journalists who were instrumental in creating a culture of print in nativo communities. He then offers in-depth cultural and literary analyses of the texts produced by los periodiqueros, establishing them thematically as precursors of the Chicano literary and political movements of the 1960s and ’70s. Moving beyond a simple effort to reinscribe Nuevomexicanos into history, Meléndez views these newspapers as cultural productions and the work of the editors as an organized movement against cultural erasure amid the massive influx of easterners to the Southwest. Readers will find a wealth of information in this book. But more important, they will come away with the sense that the survival of Nuevomexicanos as a culturally and politically viable group is owed to the labor of this brilliant generation of newspapermen who also were statesmen, scholars, and creative writers.
AUTHOR BIOGRAPHY
A. Gabriel Meléndez is Professor and Chairman of the Department of American Studies at the University of New Mexico.