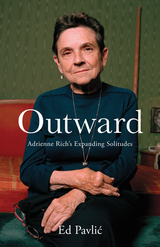 Adrienne Rich is best known as a feminist poet and activist. This iconic status owes especially to her work during the 1970s, while the distinctive political and social visions she achieved during the second half of her career remain inadequately understood. In Outward, poet, scholar, and novelist Ed Pavlic considers Rich’s entire oeuvre to argue that her most profound contribution in poems is her emphasis on not only what goes on “within us” but also what goes on “between us.” Guided by this insight, Pavlic shows how Rich’s most radical work depicts our lives—from the public to the intimate—in shared space rather than in owned privacy.

Informed by Pavlic’s friendship and correspondence with Rich, Outward explores how her poems position visionary possibilities to contend with cruelty and violence in our world. Employing an innovative framework, Pavlic examines five kinds of solitude reflected in Rich’s poems: relational solitude, social solitude, fugitive solitude, dissident solitude, and radical solitude. He traces the importance of relationships to her early writing before turning to Rich’s explicitly antiracist and anticapitalist work in the 1980s, which culminates with her most extensive sequence, “An Atlas of the Difficult World.” Pavlic concludes by examining the poet’s twenty-first century work and its depiction of relationships that defy historical divisions based on region, race, class, gender, and sexuality.

Ed Pavlic is distinguished research professor of English and African American studies at the University of Georgia. He is the author of twelve books, including, most recently, the poetry collection Let It Be Broke, the novel Another Kind of Madness, and the critical study Who Can Afford to Improvise? James Baldwin and Black Music, the Lyric and the Listeners. He also wrote Crossroads Modernism: Descent and Emergence in African-American Literary Culture (Minnesota, 2002).

Introduction: “How we are with each other”

“Our words misunderstand us.”

“look at her closely if you dare”

“solitude of no absence”

“so are we thrown together”