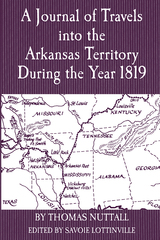 This is the famous naturalist Thomas Nuttall's only surviving complete journal of his American scientific explorations. Covering his travels in Arkansas and what is now Oklahoma, it is pivotal to an understanding of the Old Southwest in the early nineteenth century, when the United States was taking inventory of its acquisitions from the Louisiana Purchase.

The account follows Nuttall's route from Philadelphia to Pittsburg, down the Ohio River to its mouth, then down the Mississippi River to the Arkansas Post, and up the Arkansas River with a side trip to the Red River. It is filled with valuable details on the plants, animals, and geology of the region, as well as penetrating observations of the resident native tribes, the military establishment at Fort Smith, the arrival of the first governor of Arkansas Territory, and the beginnings of white settlement.

Originally published in 1980 by the University of Oklahoma Press, this fine edited version of Nuttall's work boasts a valuable introduction, notes, maps, and bibliography by Savoie Lottinville. The editor provided common names for those given in scientific classification and substituted modern genus and species names for the ones used originally by Nuttall. The resulting journal is a delight to read for anyone—historian, researcher, visitor, resident, or enthusiast.

Thomas Nuttall was a self-educated botanist who came to the United States from Liverpool in 1808 at the age of twenty-two. Nuttall made several scientific expeditions in America during the first half of the nineteenth century. He was recognized in his time for his botanical discoveries, served for many years as a lecturer in natural science and as curator of the Cambridge Botanic Garden at Harvard, and published several books.

Savoie Lottinville, a graduate of the University of Oxford, was director of the University of Oklahoma Press for thirty years and was for several years Regents Professor of History. Among the several books he authored or edited are The Rhetoric of History (1976) and Travels in North America, 1822–1824, by Paul Wilhelm, Duke of Wurttemberg (1973).