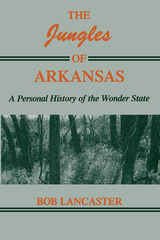 When H. L. Mencken wrote about "the miasmatic jungles of Arkansas," he was referring to the relative obscurity and uncertain image that Arkansas has enjoyed—or suffered from—throughout its history. In these entertaining and sometimes quirky essays, Lancaster sheds light on that image by analyzing the stereotypes that have characterized the state since its very beginning.
REVIEWS
". . . revelations of the state's unique wonders that only a born writer with a practiced eye can bring to life on the printed page." —Dee Brown